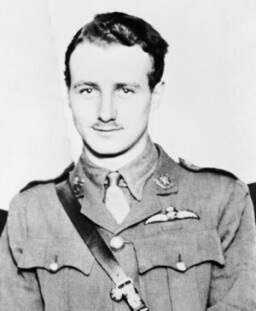 William Leefe Robinson was born in South Coorg, India on July 14, 1895. His parents were Horace and Elizabeth Leefe Robinson. He was educated in England. He entered the Royal Military College, Sandhurst in August 1914; ten days after hostilities began. He was commissioned into the Worcestershire Regiment in December 1914. In March 1915, he went as an observer with the Royal Flying Corps to France. After being wounded at Lille, he underwent pilot training before being attached to No. 39 Squadron in Essex for London defense. In the early hours of September 3, Robinson’s pursuit of an airship and its destruction was watched by thousands of Londoners. He became a national hero.

His citation in the London Gazette read: "Lieutenant William Leefe Robinson, Worcestershire Regiment and Royal Flying Corps. On the night of 2nd/3rd September 1916, Lieutenant Robinson sighted a German airship over Cuffley, Hertfordshire - one of sixteen which had left bases in Germany for a mass raid over England. The Lieutenant made an attack at a height of 11,500 ft., approaching from below and closing to within 500 ft., raked the aircraft (a wooden framed Schutte Lanz SL 11) with gunfire. As he was preparing for another attack, the airship burst into flames and crashed in a field."

As a valuable public hero, he was grounded so he could continue attending official engagements. His successful action was of enormous morale and propaganda value to the British Government as it represented a turning point in countering and repelling the airship menace from Germany. It was the birth of aerial night fighting.

Robinson was allowed to return to active service in early April 1917 and was posted to France as commander of No. 48 Squadron. On his first patrol over enemy lines on April 5, he was shot down and captured. The opposing German aircrafts were led by Manfred von Richthofen, the ‘Red Baron’. Imprisoned in a POW camp, and known to his captors as the ‘Zeppelin destroyer’, he was treated badly and his health declined. He was finally repatriated in early December 1918 in time for Christmas with his family. He had contracted the Spanish Flu virus while a prisoner and died on December 31, 1918.

Lieutenant Robinson is buried at Harrow Weald, in Middlesex. His Victoria Cross is displayed in the Lord Ashcroft Gallery in the Imperial War Museum, London.