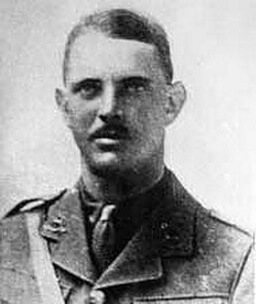 Clement Robertson was the fourth son of Major John A. and Frances Robertson from Struan Hill in County Wicklow in Ireland. His father was posted to South Africa with the Royal Artillery and Clement was born on December 15, 1890.

Clement enlisted in the royal Fusiliers in October 1914 and was commissioned in the Queen’s Royal West Surrey Regiment in January 1915. From June 1916 to February 1917 he was attached to the Royal Engineers. He was 26 years old, and serving as an acting captain in the Royal West Surrey Regiment attached to the Tank Corps during the Battle of Broodseinde on October 4, 1917.

His citation stated: "For most conspicuous bravery in leading his tanks in attack under heavy shell, machine-gun and rifle fire, over ground which had been heavily ploughed by shell-fire. Captain Robertson knowing the risk of the tanks missing the way, continued to lead them on foot, guiding them carefully and patiently towards their objective although he must have known that his action would almost inevitably cost him his life. This gallant officer was killed after his objective had been reached, but his skillful leading had already ensured successful action. His utter disregard of danger and devotion to duty afford an example of outstanding valour."

As he was not married, his posthumous award was presented to his mother by Brigadier General C. Williams CB in March 1918. His was the first V.C. to be awarded to the Tank Corps. The grave of Captain Robertson is in the Oxford Road Commonwealth War Graves Commission Cemetery, north-east of Ypres. His headstone bears the Latin inscription “Virtutis Gloria Merces”.