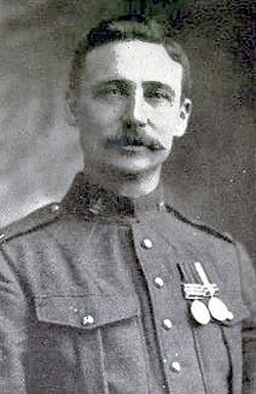 Frederick Hobson was born in London England on September 23, 1873, the son of John Hobson, a stone mason, and his wife Sarah Hobson. After the death of both parents, he enlisted in the British Army and served with the Wiltshire Regiment during the Second Boer War (1899-1902). Returning to England, he emigrated to Ontario Canada in 1904 with his wife and children.

In November 1914 he joined at the age of 41 the Norfolk Rifles, and then enlisted in the 20th Battalion of the Canadian Expeditionary Force.

Sergeant Hobson’s citation stated: "During a strong enemy counter-attack, a Lewis gun in a forward post in a communication trench leading to the enemy lines was buried by a shell and the crew, with the exception of one man, killed. Sergeant Hobson, though not a gunner, grasping the great importance of the post, rushed from his trench, dug out the gun and got it into action against the enemy who were now advancing down the trench and across the open. A jam caused the gun to stop firing. Though wounded, he left the remaining gunner to correct the stoppage, rushed forward at the advancing enemy and with bayonet and clubbed rifle, single handed, held them back until he himself was killed by a rifle shot. By the time the Lewis gun was again in action and reinforcements shortly afterwards arriving, the enemy were beaten off. The valour and devotion to duty displayed by this non-commissioned officer gave the gunner the time required to get the gun into action, and saved a most serious situation."

Sergeant Hobson was killed on August 18, 1917 at Hill 70 near Lens, France but has no known grave. He was awarded a posthumous Victoria Cross. His medal is displayed at the Canadian War Museum in Ottawa, Ontario, Canada.