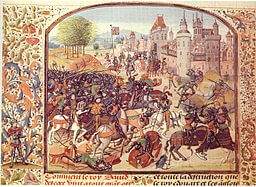 The battle of Neville’s Cross was fought on October 17, 1346. This was a battle that should never have happened.

It all began when the English won a decisive victory at Crecy over the French in August 1346. Edward III immediately laid siege to the port city of Calais in France. Unable to break the siege, Phillip IV of France requested King David II to distract the English by mounting an invasion of northern England during what became known as the "100 Years War".

King David Bruce agreed to help and mustered an army at Perth. Duncan (1st chief) raised the clan and joined the Scottish host. The army moved into England with fire and sword until they almost reached the city of Durham. Anticipating such an alliance, Edward III had secretly gathered and stationed an army to protect his rear. West of Durham, this unknown English army was waiting for the Scots. Following standard battle practice the Scots formed three divisions with David leading the center, Robert Stewart (David’s nephew and future King of Scots) leading the left and Douglas on the right flank. Eventually the Scots attacked and were pushed back. As the position grew more dangerous, Robert Stewart panicked and fled the battlefield hastening the final defeat.

David was captured after the battle and held for ransom at Odiham castle in Hampshire. He remained a prisoner for eleven years until in 1357 the 100,000 marks ransom was raised and paid. Captured along with many others at this battle were Duncan (1st chief) and his eldest son Robert (future 2nd chief). They were eventually ransomed and returned to Atholl. Duncan died around 1355 and in 1357, Robert received a charter from King David thanking "Robert of Atholl, son of Duncan" for his honorable service. Robert also appears in the Chamberlain Rolls dated 1358 regarding taxes owed and "upon which the King is to be consulted". The problem seemed to be that Robert didn’t want to be taxed the same amount as his father had paid, because his two younger brothers had inherited portions of their father’s lands (Patrick received the Lude properties and Thomas received the lands of Strowan and Strathloch).