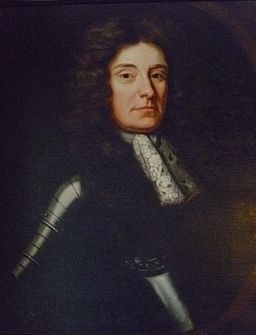 In 1636, Alexander (11th chief) died and his infant son, Alexander, succeeded him as the twelfth chief of our clan. During his minority, his uncle Donald (known as the "Tutor of Struan") led the clan during the 1649-1650 campaigns of the Marquis of Montrose in support of King Charles II after the execution of King Charles I on January 30, 1649.

Due to various land disputes with the Marquis of Atholl, Alexander had to appear before the Court of Sessions in February 1681 and despite holding a Crown charter for his lands was served heir in general to nine generations of his ancestors, going back to Robert, the son of Duncan of Atholl. By his second marriage to Marion Baillie of Letham, he had two sons, Alexander (13th chief) and Duncan, and a daughter Margaret. Duncan later served with distinction in the army of Peter the Great of Russia.

In December 1681, Archibald Campbell, Earl of Argyll was convicted of high treason by the Court of Sessions with support from the Duke of York (the future King James II). Campbell fled to Holland before the sentence of death could be carried out. In May 1685, Argyll returned to Scotland from Holland and raised the standard of rebellion against King James II, for the avowed purpose of keeping the protestant religion. King James II was intent on restoring the Catholic faith to Scotland. On landing, messengers were sent with 'fiery crosses' around Argyll to raise 2,500 of his clan to support his rebellion. King James II immediately called on loyal royalists to raise their militias to oppose Argyll. The Duke of Gordon, Earl of Dumbarton and Marquis of Atholl brought their forces together in a pincer movement and forced Argyll to move his men toward Glasgow where he was eventually taken prisoner near Dumbarton without a major battle being fought.

Atholl had summoned the Atholl clans to rise in opposition to Argyll. Alexander refused to raise our clan for this campaign despite their differences in political sympathies due to "an ancient bond of friendship" with the Duke of Argyll. Alexander was still displeased over the former land disputes with the Marquis and thus incurred more displeasure from the Marquis. Atholl and Lord John Murray (the Marquis' son) led 1,500 Athollmen during this successful short-lived campaign.

Argyll was beheaded in Edinburgh on June 26, 1685 without trial since he had previously been sentenced to death in 1681. His two sons were banished. This was the same fate that he had witnessed thirty-five years previously when Montrose was executed in May 1650.