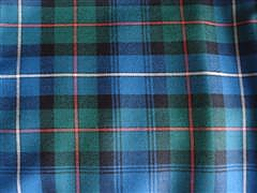 Thirty-one years after Culloden, Lord George Murray’s grandson, the 4th Duke of Atholl, raised a Highland regiment for the regular army. Named the 77th Atholl Highlanders, the regiment was raised in 1777 to serve for three years or for the duration of the American War of Independence. It was stationed in Ireland until 1783 where a possible landing of French or Spanish troops was feared. With peace concluded with America, the 77th Atholl Highlanders were ordered to Portsmouth for transfer to India. When the regiment heard of their new orders, they mutinied. Finding that the terms of enlistment did not allow this transfer, the Government rescinded its orders and the regiment was marched back to Scotland and disbanded. This kilted regiment wore the Atholl tartan.

There are two schools of thought about the origin of the Atholl tartan. It is believed to have evolved by adding a red stripe to the blue and green Government tartan worn by the Black Watch. On the other hand, the first Highland Watch, from which the Black Watch eventually developed, was raised by the then Earl of Atholl in 1667, and its possible they could have been dressed in a uniform Atholl or green Murray tartan, since it was the tartan of their commander. Unfortunately, there are no records from the period to prove it either way. However, it originated, the Atholl or modern green Murray tartan was the basis for what we now know as the Hunting Robertson tartan.

The formation of fencible regiments were authorized in 1802 with the end of the French Revolution and the rise of Napoleon. England declared war with France in 1803. These regiments were raised and trained throughout Scotland during the early Napoleonic era as a reserve force against an expected French invasion of England. The French threat of invasion wasn’t eliminated until October 21, 1805, when Admiral Nelson sank half the combined French and Spanish fleets at Trafalgar. With France’s challenge to British sea power destroyed, the militias were later demobilized so that highlanders could fill the Scottish line regiments fighting on the continent.

General William Robertson of Lude raised the Loyal Clan Donnachie Volunteers and maintained them at his private expense from 1803 until 1809. Today’s Hunting Robertson tartan was probably developed in 1803 specifically for this group of clansmen. It is based on the Atholl tartan with the addition of a white stripe in both the warp and weft crossing in the blue.

The Loyal Clan Donnachie Volunteers consisted of three companies. Under the command of Colonel John Robertson of Lude (the General’s brother) and Robert Robertson of Auchleeks, the Lude and Glenerochty companies wore Robertson Hunting tartan kilts and red jackets with white facings while the officers wore silver laced uniforms. Robert Reid, in a gold laced uniform, commanded the Mounted Artillery Company, which wore blue coats and facings with blue breeches.

Major General David Stewart of Garth visited Colonel Alexander Robertson of Struan (15th chief) in 1815 to request a sample of the clan tartan. Unable to identify one at that time, Struan eventually provided a pattern which bears no likeness to any of our clan tartans worn today. In 1816 Struan sealed that the Hunting Robertson tartan was the true clan tartan for the Highland Society of London’s collection.