Silas Duncan was born in Rockaway, New Jersey, in 1788. He was appointed a Naval midshipman on 15 November 1809. While third lieutenant of the U.S.S. Saratoga during the Battle of Lake Champlain on 11 September 1814, he was sent in a gig to order the gunboats to retire. He succeeded in delivering the orders despite concentrated enemy fire which severely wounded him resulting in the loss of his right arm. For his gallant conduct he received a Thanks of Congress commendation. From 1814 to 1824 Commander Duncan saw active service on board Independence, Hornet, Guerrier, Cyane, and Ferret.

On 3 February 1831, he married Martha Dandridge Aylett, the third-youngest of six daughters from among the 13 children of Philip Aylett, of King William County, Virginia. Martha was also a granddaughter of the American attorney, planter, politician, orator, and patriot Patrick Henry, whose mother was a Robertson.

In 1831, he commanded the U.S.S. Lexington, which had been sent to reinforce the Brazil Squadron to protect American commerce, in part a response to Argentine proclamations on sealing and fishing in the South Atlantic. In July 1831, Matthew Brisbane, under orders from Luis Vernet (the Military and Civil Commander in the Falkland Islands appointed by Buenos Aires), seized the American merchant vessels Superior, Breakwater and Harriet, charging them with sealing in the Falkland Islands in contravention of Vernet's regulations. The Breakwater escaped and the Superior was allowed to continue sealing on Vernet's terms. Luis Vernet returned in the Harriet to Buenos Aires to arrange for a trial.

After this seizure of American vessels, the U.S.S. Lexington under Duncan sailed for Port Louis to put an end to what was regarded by the U.S. as a "nest of pirates". On 31 December 1831, the Lexington came to anchor off Port Louis, where Brisbane and six others were arrested on charges of piracy, the guns of the settlement were spiked and the powder magazine blown. Duncan also offered passage to any from the settlement that wished to leave, and the majority of the population took up this opportunity to leave the islands. The Lexington arrived in Montevideo on 3 February 1832, where those given passage were released, except for Brisbane and six others who remained as prisoners until 16 April, when they were transferred to the U.S.S. Warren. Brisbane and the others were later released on the orders of Commodore Rodgers after the intervention of the British Chargé d'Affaires in Buenos Aires.

The incident caused a rupture in Argentine-U.S. relations for many years, after Argentina expelled the US representative during the diplomatic row that followed. Although the log of the Lexington reports destruction of arms and a powder store, the remaining settlers later testified that there was great damage to private property.

On 7 December 1832, the ARA Sarandí while on patrol around the Falkland Islands, encountered the American sealer, The Sun, under the command of T.P. Trott. After firing on The Sun and boarding her, the captain was ordered to quit the Falklands. Trott returned to Montevideo and addressed the American legation there seeking protection from an American warship. In Montevideo, Trott was instructed to return to the islands and to ignore the warning, while the U.S.S. Lexington was prepared to return to the islands and if necessary seize the Sarandí. This second exhibition never took place, since during preparations the Sarandí was observed returning to Buenos Aires following the reassertion of British sovereignty over the Falkland Islands.

Silas Duncan attained the rank of captain and died in 1834 at White Sulphur Springs, Virginia (now West Virginia). He has had three U.S. Naval ships named for him; the U.S.S. Duncan DD-46, DD-485 and DD-874.

A fourth U.S. Naval vessel has also born the name Duncan, the U.S.S. Duncan (FFG-10) an Oliver Hazard Perry-class frigate but this ship was named in honor of Vice Admiral Donald B. Duncan (1896–1975).

The Duncan sailed along the East Coast and in the Caribbean for training, target practice, and exercises until 24 October 1914, when she was placed out of commission at Boston, Massachusetts. Re-commissioned on 22 January 1916, she sailed out of Hampton Roads and Newport, Rhode Island for Neutrality Patrol and exercises in the Caribbean, protecting battleships in fleet maneuvers, and guarding the entrance to the York River. From 8 - 30 September 1917, she escorted a convoy to an eastern rendezvous, where an escort out of England met the ships.

Sailing for New York on 30 October, Duncan escorted a convoy to Brest, France, arriving at Queenstown, Ireland, on 15 November to escort convoys and hunt submarines in the Irish Sea. On 17 July 1918, Duncan rescued from a small boat the survivors of the Norwegian bark Miefield and on 9 October, when one of her sisters, Shaw collided with RMS Aquitania, Duncan took off 84 of her crew, 12 of them wounded, and stood by while Shaw's remaining men took their ship into the Isle of Portland, England, under her own power.

Remaining in European waters after the war, Duncan joined in escorting George Washington, bearing President Woodrow Wilson, into Brest on 13 December 1918. She cleared Queenstown on 26 December for the Azores, Bermuda, and Norfolk, Virginia, arriving on 12 January 1919.

After five months of East Coast and Caribbean operations, she was placed in ordinary at Norfolk on 31 May; in reduced commission on 1 January 1920; in reserve on 1 August; assigned to operate with 50% of her complement on 1 January 1921; and decommissioned on 9 August 1922. She was scrapped on 8 March 1935 in accordance with the terms of the London Naval Treaty. 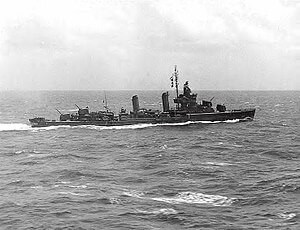 The Duncan sailed from New York on 20 June 1942 for the South Pacific, arrived at Espiritu Santo on 14 September to join Task Forces 17 and 18, and with them departed the same day to cover transports carrying the 7th Marine Regiment to reinforce Guadalcanal. The Duncan was in the screen of the aircraft carrier Wasp next day when the task force was attacked by two Japanese submarines. The Wasp was torpedoed, and so severely damaged that she had to be sunk by United States ships. The Duncan picked up survivors from the carrier, transferring 701 officers and men to other ships, and 18 wounded and 2 bodies to the base hospital at Espiritu Santo.

The Duncan continued to operate from Espiritu Santo to the Solomons, screening transports and ships of the covering forces. On 11 October 1942, she was in the screen of Task Force 64 which was assigned to protect a vital transport convoy carrying reinforcements to Guadalcanal. Contact was made with a large enemy surface force just as the American ships were executing a course change as part of their battle plan. The Duncan, having a clear radar contact and seeing her flagship apparently steady upon a course which would close the target, believed the destroyers were closing to attack, and she found herself charging alone toward the enemy force.

In the resulting Battle of Cape Esperance, the Duncan pumped several salvos into a cruiser, then shifted fire to a destroyer, at the same time maneuvering radically to avoid enemy fire and that from her own forces, who were now joining in the attack. She got off two torpedoes toward her first target, Furutaka, and kept firing until hits she had received put her out of action. The commanding officer ordered the bridge, isolated by fire, abandoned, and the wounded lowered into life rafts. The men on board attempted to beach the ship on Savo Island, but then, believing she might yet be saved, continued to fight the fires until power failed, when they abandoned ship. The Destroyer McCalla rescued 195 men from the shark-infested waters and made an attempt to salvage Duncan, but she sank on 12 October 1942, about 6 miles (10 km) north of Savo Island. The Duncan received a battle star for her World War II service. 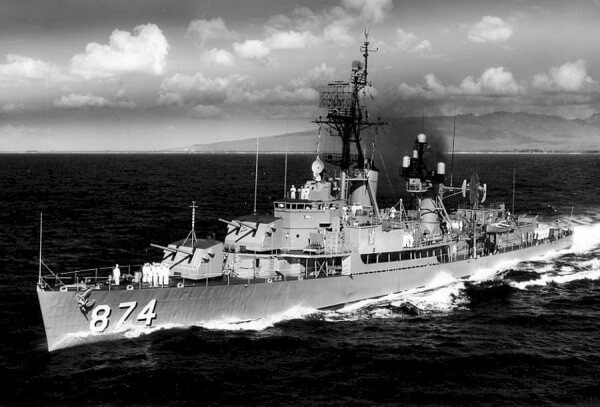 U.S.S. Duncan (DD-874) was a Gearing-class destroyer of the United States Navy, the third named for Captain Silas Duncan USN. The Duncan was converted to a radar picket destroyer during her post-shakedown overhaul, sailed from Norfolk on 2 June 1945 for the Pacific, and after touching at San Diego and Pearl Harbor, joined the Cabot (CVL-28) for screening and plane guard duty during the strikes on Wake Island of 1 August. After calling at Eniwetok, she continued to Okinawa to join the 7th Fleet for patrol duty off the Chinese and Korean coasts during the landing of occupation troops at Tsingtao, Taku, and Incheon. The Duncan served in the Far East on occupation duty until 25 March 1946 when she sailed for the west coast, arriving at San Diego on 28 April.

For the next year Duncan trained along the west coast, keeping high her operational skills and readiness. In May 1947 she departed San Diego for a five-month cruise to the Far East, where she visited Okinawa, Japan, and China. On her return to the States, Duncan resumed coastal operations with both aircraft and submarines. On 1 March 1948 she suffered an explosion on board that killed 2 crewmen and injured 14. She suffered considerable damage at the stern and the flooding of the after compartment from a hole at the water line. After repairs at Long Beach, California, the destroyer rejoined the fleet for training until January 1949, when she again sailed for the western Pacific, this time for eight months. The Duncan was reclassified DDR-874 on 18 March 1949.

The Duncan operated between San Diego and Pearl Harbor until November 1950 when she steamed into Korean waters to join the 7th Fleet, serving three tours off Korea during the fighting. She sailed as plane guard for carriers and as anti-submarine escort for battleships; she fired shore bombardments in support of minesweepers and to interdict enemy communications; she patrolled against North Korean minesweepers and fishing craft. Through all she added her significant contribution to the vast sea-borne support to the United Nations troops ashore.

After the end of the Korean fighting in 1953, the Duncan remained busy in the Pacific, alternating Far Eastern duty with training and maintenance on the west coast. She visited Australia, Japan, the Philippines, Taiwan, Hong Kong, and many islands of the Pacific. During 1960-1961 Duncan entered the Fleet Rehabilitation & Modernization program, and underwent extensive overhaul and modernization at Long Beach Naval Shipyard.

During the Vietnam War the Duncan served as plane guard for aircraft carriers on "Yankee Station" in the Gulf of Tonkin, participated in Operations "Sea Dragon" and "Market Time", patrolled on search and rescue duties, and carried out naval gunfire support missions.

Duncan was decommissioned on 15 January 1971, struck from the Naval Vessel Register on 1 February 1974, and sunk as a target off California on 31 July 1980. The Duncan received seven battle stars for Korean War service.