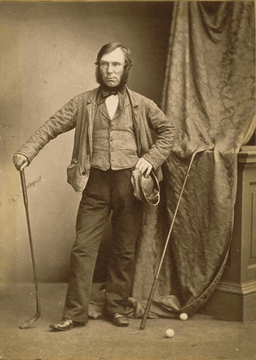 I recently came across a golfing book entitled "St Andrews and Golf" and was pleased to learn about a Scotsman named Allan Robertson. He was the champion golfer of his day and is considered the first golf professional. It was interesting to me to note that his golfing partner was a Morris which is a sept of the clan Morrison which is the clan of my son Ed's wife Kimberly.

Allan was born on September 11, 1815 to a family of golf ball makers and caddies in Saint Andrews that had made feather balls by hand since the early 1700s. There was an ongoing trade with America with hickory shafts being exported to Scotland and golf clubs and balls being imported back as early as the 1740s.

"While other makers imprinted balls with their last names, Robertson just stamped ‘ALLAN' in capital letters on his golf balls." The feather golf balls were expensive (costing about three times the cost of a single club). The high cost meant that only the wealthy could afford to play. This changed in 1848 when the gutta-percha resin became available. Imported from Malaysia, the rubber-like sap was collected by cutting the tree's bark. The collected resin could be heated and shaped either by hand or in a mold then was allowed to harden into its new shape. The gutty ball cost half the price of a club and this led to a dramatic growth in the number of golfers in Scotland.

Allan was one of the first golf professionals. When not making golf balls in the 1840s and 1850s, he would compete in challenge matches for money, often partnering with his apprentice, Tom Morris. In 1848, they fell out over the use by Tom Morris of the new gutty ball. Tom had broken his promise never to use the new ball in play which threatened Robertson's trade. Tom Morris then set up his own shop in Prestwick and made both types of golf balls. We know him today as "Old Tom" Morris to differentiate him from his golfing son "Young Tom". Allan was the first to introduce an iron club for pitching the ball to the green. It was Young Tom who perfected the use of the niblick to stop a ball quickly on a hard green.

In the early 1850s, Allan too began producing and using the new ball. There was a great rivalry between the St Andrews and Musselburgh courses and there were matches between the two clubs that drew large crowds. In July 1843 Allan played a match with Willie Dunn over the Old Course at St Andrews. The match was over 10 consecutive days of two rounds per day. On the tenth day with Allan ahead by one round, he won the morning round and thus being ahead two rounds with one to play was declared the winner. In 1849 Allan and Tom Morris took on the formidable twins, Willie and Jamie Dunn of Musselburgh for the then huge stake of 400 pounds. The Dunns won on their home course and the Morris/Robertson team won at St Andrews. The deciding match at the ‘neutral' course of North Berwick was won by Tom and Allan. The pair were never beaten in foursome play.

Using the gutty ball, Allan in 1858 was the first person to break 80 (shot 79) on the Old Course. That round occurred just a few months before his death from jaundice, and a little more that a year before the first Open Championship was held in 1860 at Prestwick. It was stated that had he lived, "there was little doubt that Allan would have captured the title. He was that good." After his death, there were those who sought an official event to find a successor to his unofficial title of professional player. Prestwick inaugurated the first Open. Allan is buried in the cemetery on the grounds of the St Andrews Cathedral.