And so it came to be in the year of few games and little news that ‘The Fargo’ did reach out to a distant clansman seeking help in filling the pages of this august publication. That help was freely given by the one known as the ‘Rogue Gordon’. Here then does he set forth a brief retelling of the life of one Samuel Reid, son of a son of Scotland and the sea.

Samuel became a powder monkey in the U. S. Navy as a boy and served under Commodore Truxton as a midshipman. In the War of 1812 he was made captain of the privateer, General Armstrong. His ship was pursued by a British squadron when he left New York in September, 1814. Through his skill he escaped during light winds by pumping water onto the sails and having the ship towed by the ship's boats. On the afternoon of September 26 he entered the harbor at Fayal in the Azores. A squadron of three British ships arrived soon afterwards, with 136 guns and 2,000 men. The General Armstrong had seven small guns and 90 men. In the evening the British attacked with four smaller boats and were beaten off. Later, at midnight, fourteen boats with cannonades and 600 men attacked the Americans again.

The British succeeded in boarding the General Armstrong after heavy losses from cannon fire. In hand-to-hand combat with the courageous crew the British were repelled with many dead and wounded. Reid dueled and killed the British leader with his cutlass. During the night, Reid moved all of his guns to one side of his ship by cutting new gun ports in anticipation of further attacks. With the light of dawn, the 18-gun Carnation came in and received a withering fire from the General Armstrong, taking so much punishment that she left the battle. As the 74-gun British ship Plantagenet began moving in for the kill, Reid scuttled his ship. Reid was wounded along with one other man but he and his crew made it to shore. The British sustained over 100 killed or wounded.

The next day Reid was invited to tea with the surviving British officers at the British Consulate. Notwithstanding the objections of the American consul, Reid accepted, ignoring the possibility of a trap. He was cheered and welcomed by the British officers as a brave and resourceful foe. Reid had delayed the British expedition against New Orleans for ten days allowing General Andrew Jackson to arrive. Jackson later told Captain Reid that if there had been no Battle of Fayal, there would have been no Battle of New Orleans. Had Reid had not engaged the British in what has been called a most decisive naval battle, Louisiana and the Northwest Territory might now be British.

After the War of 1812 Samuel became harbor master for New York City. He made many innovations including a signal code for U. S. vessels and the use of the semaphore system for speedy advice on ship arrivals. He devised a method of rapid signaling by land which permitted messages to go from New York to New Orleans in two hours.

In January 1817, Reid was asked by Representative Peter H. Wendover for advice in the design of a new U.S. flag (the third version of the Stars and Stripes). The flag then in use had fifteen stars and fifteen stripes; it had not been updated to reflect the five new states which had joined the union since that version of the flag was implemented in 1795. 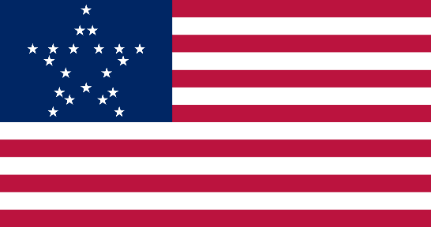 Samuel sketched three flag designs, one for general use which featured the twenty stars arranged in the shape of a larger star, one for use on government vessels and buildings which featured an eagle on the canton instead of stars, and one for use on ceremonial occasions which featured a different element (stars, stripes, the Great Seal, and the Goddess of Liberty) on each of the flag's four quarters. Reid also proposed the rule of adding a star to the flag for each new state, but keeping the stripe count at 13 to represent the original colonies. The congressional committee adopted Reid's general-use flag, but never seriously considered his other two designs.

Legislation was drafted by Wendover stipulating that the thirteen-stripe, twenty-star design become the new official flag of the United States. The bill passed and on April 4, 1818 the Flag Act was signed into law. The pattern of the stars was later changed from Reid's Great Star design to four rows of five stars each. Many of the great star flags were made and utilized as late as 1845.

Reid was appointed a master in the Navy in 1844 (a US Naval rank listed as a warrant officer and ranked between midshipmen and lieutenant). The rank of master was made a commissioned officer rank in 1837 and utilized until it was replaced in 1883 with the current rank of lieutenant, junior grade).

Having served his country well in peace and war, Captain Reid died on 28 January 1861 at the age of 78 and was interred at Green-Wood Cemetery in Brooklyn, New York. He is due the gratitude of the Nation, and our recognition as a Naval hero, innovator, and the designer of our present flag. The Navy has honored him by naming four U.S. Naval combat vessels for him, three destroyers DD-21, DD-292, DD-369, and a guided-missile frigate (FFG-30).

Samuel's grave site was overlooked for many years until Thomas Manning, the Green-Wood Cemetery supervisor and an amateur historian, discovered the unmarked grave where this naval hero of the War of 1812 had remained unknown and unrecognized for almost 95 years. Manning obtained the support of Brooklyn Congressman Francis E. Dorn, local veteran's groups and other organizations to properly mark Reid's last resting place. The greatest difficulty was in locating the surviving descendants to receive permissions for the monument. Old Glory Post No. 48 of the American Legion responded by marking the grave with a flag and wreath until the erection of the monument.

On October 28, 1956, the efforts of the Reid Memorial Committee met with fruition. An Act of Congress authorized the erection of a granite monument and flag pole. This was dedicated during colorful ceremonies. Secretary of the Navy Charles S. Thomas gave the principal address at the dedication and a wreath was laid for Kings County veterans organizations. The ceremonies were attended by two of Reid's descendants, Colonel Louis Sanders, a great-grandson, and Samuel Chester Reid, 4th, a great-great-grandson.

a. Samuel's daughter, Mary Isabel Reid married an Italian-American, U.S. Army officer Luigi Palma di Cesnola, in February 1861. He founded a private military school for officers, where in six months he trained over seven hundred students. In 1862 he took part in the American Civil War as colonel of the 4th New York Cavalry Regiment, serving under the name Louis P. di Cesnola. At the Battle of Aldie (June 1863), Colonel di Cesnola was wounded and taken prisoner. He received a Medal of Honor for his efforts during the battle. He was released in a Prisoner Exchange and continued to serve including both in the Wilderness and Petersburg campaigns (1864–65) as a commander of a cavalry brigade. Although he was nominated for appointment to the brevet grade of brigadier general to rank from March 13, 1865 after the end of the war, the U.S. Senate never confirmed his appointment. Following the war, he served as the United States consul in Cyprus (1866–77) and became the first Director of the Metropolitan Museum of Art in New York (1879-1904).

b. A newspaper article in The Virginian-Pilot of February 26, 1967, noted that a descendant of Samuel Chester Reid, Mrs. Elizabeth Virginia Johnson, was living in Portsmouth, Va. at that time. It was reported that Mrs. Johnson's mother's oldest brother, W. B. Reid, married a direct descendant of Betsy Ross and that his wife made a Confederate flag flown during the Civil War atop a paper mill at Neuse River Falls, NC.