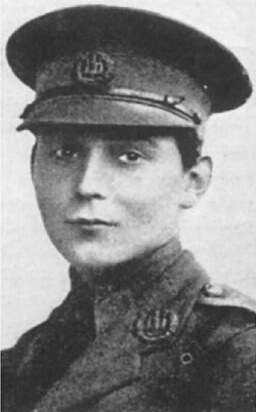 Captain Thomas R. Colyer-Fergusson was the youngest son of Thomas Colyer-Fergusson, High Sheriff of Kent in 1906 who had homes at Wombwell Hall and Ightman Mote in Kent. On the outbreak of the war, he enlisted in the Public Schools Battalion and went to France in November 1915 with the 2nd Battalion Northamptonshire Regiment and was wounded at the Somme in July 1916.

In January 1917 he was promoted to Acting Captain and given command of B Company. On the morning of July 31, he led his men towards their objective of the Belewaarde Ridge. They were participating in what became known as the Battle of Passchendaele.

His citation stated: "For most conspicuous bravery, skilful leading, and determination in attack. The tactical situation having developed contrary to expectation, it was not possible for his company to adhere to the original plan of deployments, and owing to the difficulties of the ground and to enemy wire, Captain Colyer-Fergusson found himself with a Sergeant and five men only. He carried out the attack nevertheless, and succeeded in capturing the enemy trench and disposing of the garrison. His party was then threatened by a heavy counter-attack from the left front, but this attack was successfully resisted. During this operation, assisted by his Orderly only, he attacked and captured an enemy machine-gun and turned it on the assailants, many of whom were killed and a large number driven into the hands of an adjoining British unit. Later, assisted only by his Sergeant, he again attacked and captured a second enemy machine gun, by which time he had been joined by other portions of his company, and was enabled to consolidate his position. The conduct of this officer throughout forms an amazing record of dash, gallantry and skill, for which no reward can be too great having regard to the importance of the position won. This gallant officer shortly afterwards killed by a sniper.".

Both men with the Captain, orderly Private Ellis and Sergeant Boulding received the Distinguished Conduct Medal. His Victoria Cross medal is on display at the Ightman Mote estate, now owned by the National Trust.