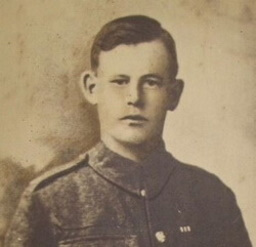 Private Hugh McIver was born in June 1890 in Kilbarchan, Renfrewshire, Scotland and enlisted in the 2nd battalion Royal Scots in August 1914.

His citation stated: "For most conspicuous bravery and devotion to duty when employed as a company runner on August 23, 1918. In spite of heavy artillery and machine-gun fire he carried messages regardless of his own safety. Single-handed, he pursued an enemy scout into a machine-gun post, and having killed six of the garrison, captured twenty prisoners with two machine-guns. This gallant action enabled the company to advance unchecked. Later he succeeded at great personal risk in stopping the fire of a British tank which was directed in error against our own troops at close range. By this very gallant action private McIver undoubtedly saved many lives." Unfortunately, he was killed in combat ten days later near Courcelles-de-Comte in France.

He posthumously received the Victoria Cross which was presented to his parents in February 1919 by King George V at Buckingham Palace.