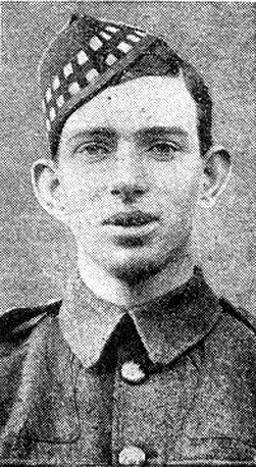 Henry Howey Robson was born in County Durham in May 1894. His father Edward Robson and mother Mary Morris Robson had ten children.

Robson enlisted as a private in the Second Battalion Royal Scots (Lothian Regiment).

His citation in the London Gazette stated: "For most conspicuous bravery near Kemmel in Belgium on December 14, 1914. During an attack on the German position, Private Robson left his trench under very heavy fire and rescued a wounded Non-Commissioned Officer, and subsequently, during another attack, he tried to bring a second wounded man into cover, whilst exposed to a severe fire. In this attempt he was at once wounded, but persevered in his efforts until rendered helpless by being shot a second time."

Private Henry Robson was presented with the Victoria Cross on July 12, 1915 by King George V. In November 1916 he returned to France and was injured on the first day of the Battle of Ancre. His Victoria Cross is now displayed at the Royal Scots Museum in Edinburgh Castle.

Robson moved to Canada in 1923 and married Alice Maud Martin in 1924. They had one son and four daughters. He served as the Sergeant-at-Arms in the Ontario Parliament in the 1930s and retired as an information clerk in 1954.