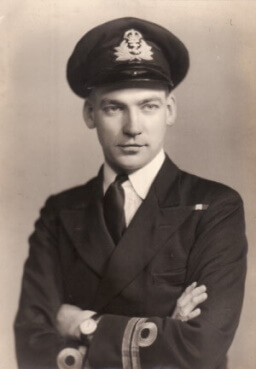 Peter Scawen Watkinson Roberts was born in Buckinghamshire England on 28 July 1917. He served in the Royal Navy from 1936 to 1962.

Roberts was a Lieutenant serving in the Mediterranean north of Crete onboard HM Submarine ‘Thrasher’ in February 1942 when he earned the award. After attacking a sinking a supply shop, the submarine was attacked. After being subjected to a three-hour depth charge and aerial bombing attack by the enemy, the submarine later resurfaced and discovered two unexploded bombs stuck in the gun-casing.

Roberts’ citation read: "Lieutenant Roberts and a petty officer (Thomas W. Gould) removed the first one without too much difficulty, but the second bomb had penetrated the side plating of the gun emplacement, and then the deck casing above the pressure hull. Roberts and Gould entered the confined space (which was no more than 2 foot high in places), and lying flat, wormed past deck supports, battery ventilators and drop bollards. The petty officer then lay on his back with the 100 lb bomb in his arms while the lieutenant dragged him along by the shoulders. Meanwhile, Thrasher was surfaced, stationary and close inshore to enemy waters. If the submarine was forced to crash dive, both men would have drown. It was 40 minutes before they got the bomb clear, wrapped it in sacking, and dropped it over the side."

Both men were awarded the Victoria Cross. Roberts retired as a Lieutenant Commander and move to Devon where he died on 8 December 1979.