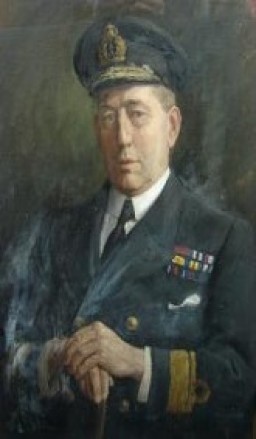 Claude Congreve Dobson was born in Bristol England on 1 January 1885. He was the son of Nelson C. and Louisa Alice Dobson. He joined the Royal Navy in 1899. Dobson was promoted to Lieutenant in 1906 and in 1907 received training in submarines. In April 1914 he was appointed to command of submarine C 27 and is credited with the sinking of U 23 off Fair Island for which he received the D.S.O.

After World War I he served in the Russian Civil War on the side of the White movement against the Bolsheviks. Allied forces consisted of British, American, Australian, Canadian and French troops. The Allied campaign in northern Russian ended with the withdrawal of Allied troops from Murmansk in October 1919.

Dobson’s citation read: "For most conspicuous gallantry, skill and devotion to duty on the occasion of the attack on Kronstadt Harbour on 18th August 1919. Commander Dobson organized and was in command of the Coastal Motor Boat (CMB) Flotilla. He led the flotilla through the chain of forts to the entrance of the harbour. CMB No.31, (a 55 foot boat), from which he directed the general operations, then passed in under heavy machine-gun fire, and torpedoed the Bolshevik Battleship "Andrei Pervozvanni", subsequently returning through heavy fire from the forts and batteries to the open sea."

He retired from the Royal Navy in 1935 and was promoted to Rear Admiral in July 1936. He died 26 June 1940 at the Royal Navy Hospital. His Victoria Cross is displayed at the National Maritime Museum, Greenwich London.