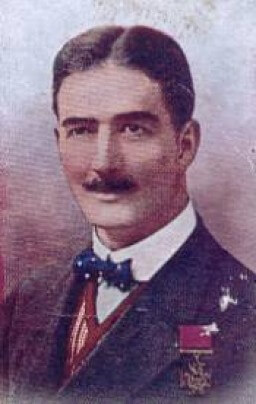 Anketell Moutray Read was born in Cheltenham Gloucestershire on October 27, 1884. He was one of six children (three boys and three girls) born to Colonel John Moutray Read and Edith Isabelle Read. He was commissioned in the Gloucestershire Regiment in November 1903 and served in India until 1911. While in India he was the Army’s heavyweight boxing champion eight times and middleweight twice. On the outbreak of World War I, he was transferred to France with the 9th Lancers. Wounded in September 1914 during an engagement on the Aisne, he recovered and returned to France with the 1st Northhamtonshire Regiment in May 1915.

Captain Read’s citation read: "On 25th September 1915 near Hulluch, France, Captain Read, although partially gassed, went out several times in order to rally parties of different units which were disorganized and retiring. He led them back into the firing line and regardless of danger to himself, moved about under withering fire, encouraging them, but he was mortally wounded while carrying out this gallant work."

He was buried in the Dud Corner Cemetery at Loos. As he had never married, his Victoria Cross was presented to his mother at Buckingham Palace by King George V on November 29, 1916. His VC is held in the Northamptonshire Regimental Museum, Abington Park, Northamptonshire.