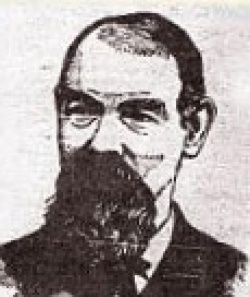 George Washington McWilliams was born on September 26, 1842 in Waterford, Pennsylvania. At the start of the American Civil War, McWilliams joined the U.S. Navy in 1864 as a landsman on the U.S.S. Pontoosuc, a side wheel steam-driven gunboat commissioned in May 1864 and decommissioned in July 1865. The ship was part of the South Atlantic Blockading Squadron escorting merchant ships and cruising off the coast in pursuit of the Confederate raider – C.S.S. Tallahassee. During this campaign, seven of Pontoosuc’s sailors received the Medal of Honor.

McWilliams’ official Medal of Honor citation read: "Served on board the U.S.S. Pontoosuc during the capture of Fort Fisher and Wilmington, 24 December 1864, to 22 February 1865. Carrying out his duties faithfully throughout this period, McWilliams was so severely wounded in the assault upon Fort Fisher that he was sent to the hospital at Portsmouth Virginia. Williams was recommended for his gallantry, skill and coolness in action while under the fire of the enemy."

McWilliams died on August 11, 1900 and was buried at Ida Grove Cemetery in Ida Grove, Iowa.