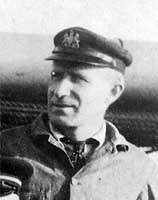 Charles Church Roberts was born on March 6, 1882 in Newton, Massachusetts. He enlisted in the U.S. Navy from Illinois in 1904.

Roberts was serving aboard the battleship U.S.S. North Dakota (BB-29) as a Machinist Mate First Class. On September 8, 1910 while the North Dakota was conducting tests using oil as fuel, an explosion occurred, killing three sailors and endangering the ship. In the engine room, hot coal and coke floated in waist-high hot water, oil was aflame above one of the boilers and the entire engine room was full of smoke, steam and fumes. Despite these dangers, Roberts and five other men of the ship’s engineering department entered the engine room to halt the fires and prevent a boiler explosion. After securing the safety of the ship, Roberts and the other five sailors were all awarded the Medal of Honor. Chief Watertender Patrick Reid was among the six sailors awarded the Medal of Honor one month later on October 4, 1910. He received the award in a White House ceremony on June 13, 1911.

Roberts’ Medal of Honor citation read: "For extraordinary heroism in the line of his profession during the fire on board that vessel where Roberts was serving, 8 September 1910."

After he was awarded the Medal of Honor, he was appointed to the warrant rank of Machinist and served on board USS Santee. The Santee was disguised as an anti-submarine decoy ship. He was temporarily promoted to the rank of Lieutenant (Junior Grade) in March 1918 and received orders to several different ships. After the World War I, in November 1919 he was assigned to the destroyer USS Reid (DD-292), then fitting out in Squantum, Massachusetts. His last assignment was aboard the USS Fox. He resigned his commission in June 1921.

Roberts died on March 8, 1957 and was buried at Prospect Hill Cemetery, Millis Massachusetts.