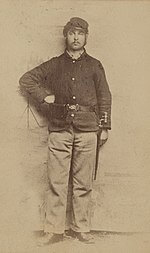 Charles Wellington Reed was born on March 1, 1842 in Charlestown, Massachusetts. He attended private schools where he studied art before joining the Union Army and served in the 9th Battery, Massachusetts Light Artillery which was mustered in August 1862.

In July 1863, the battery joined the 1st Volunteer Brigade, Artillery Reserve, Army of the Potomac and marched to Gettysburg for what became its first engagement. On the second day of Gettysburg fighting, under constant fire, Reed led two horses into the firing zone to retrieve his wounded battery captain. Thirty years later, Captain Bigelow recommended Reed to the adjutant general of the United States for the Medal of Honor which was approved in August 1895.

Reed’s Medal of Honor citation read: "The President of the United States of America, in the name of Congress, takes pleasure in presenting the Medal of Honor to Bugler Charles Wellington Reed, United States Army, for extraordinary heroism on 2 July 1863, while serving with Battery 9, Massachusetts Light Artillery, in action at Gettysburg, Pennsylvania. Bugler Reed rescued his wounded captain from between the lines."

In November 1864 because of his background in art, Reed became a topographical engineer and completed roughly seven hundred sketches. After the war, Reed became an illustrator and painter.

Charles Reed died on March 29, 1926 and was buried in Norwell, Massachusetts.